Marrakech Desert Imprial Cities tour departure will be at an early hour in the morning, where we will pick you from your Hotel in Marrakech  you will take the the way to passing thousand of Morocco Specific argane trees on the way  to this blue and white, very individual sea side town and port Essouira touristic city Known as Mogador to the Portuguese inhabitants, it is a charming place , Essouira hqs a favourable micro clmate mild in winter and cool summer , although frequently windy, wich makes it very popular among surfers,and you will spend overnight at your riad in Essouira

You will not regret waking up early to enjoy watching a magnificent scenery   the view of the beautifual weather and the After taking a shower, and having breakfast, we will follow the costal road south with constant views of the Atlantic , often battering the rocks and sending up picturesaue spary as it beats against them We pass Agadir continue south to Tiznit the town famous for its silver jewelry from and after ze will turn toward to the sea and take the particularly beautiful coastal road to Sid ifni this is a little neat blue and white town with a distinctly Spanish feel to it it takes its name from a local holy man and was the capital the ait ba arame tribe famous for its resisttance against the Spanish and after will drive to the riad\hotel where you will spend the night

The third day on Marrakech Desert Imprial Cities We will drive to Tafraoute after taking breakfast, where we are going to spend the night after a brief walk over the village, which is a 1220m over sea village, situated in the middle of numerous block of pink granite, which turned to purple and ochre because of the reflection of the sun. We will pass along the road by the opening of the Moroccan”, Amtoudi, and through the high Anti-Atlas to observe the oasis and the small villages out there.And over night at Tafraoute

after taking breakfat before we toward to Taroudant you visit the fa;ous painted rocks coloured in 1984 bythe Belgian artist jean Verame , He used 18 tons of blue pink , and blak paint, helped in his project by men from the Tafroute fire brigade this work of art has proved very controversial project by men from the it question its existence and to despise it is certainly an individual and other piece of art we then set the same name , Later we turn towards to Taroudant the little Marrakesh so called for the similarity of its ramparts and towon walls to those of the red city here we spend the night at taroudant

We will commence our Marrakech Desert Imprial Cities at 8 O’clock, driving by the 4×4 from to the spectacular Then, to the heart of the  saffron growing area of Tilouine, passing by the Tizi-N-Taghatine, and Tizi-N-Ikhsane mountain passes. We will continue,  to Taznakht, to have lunch, which is a small town famous for its handmade Berber carpets, and Gelims “Foum Zguid” we will drive to visit the Iriqui Lake looking for some fossils, which was once full of fish and water birds, but now it is mostly dried up. Along the off-road piste,we will pass through various parts of the desert, Reg, the stony desert, and Hammada, while lunch will be at Chegaga, which is a far away part of the desert, where you can enjoy one to two hours camel ride, to see the stunning view of the sunset at the top of the dunes. We will spend a night at the Bivouac.

Marrakech Desert Imprial Cities, We will drive 60km of the desert, after having breakfast, toward M’hamid passing by the Sacred Oasis. At M’hamid,  on the opposite side of the Daraa River, then to the longest valley in Morocco, the “Daraa Valley”, passing by its largest oasis “Zagora”, which is famous for its dates. We will continue through the ancient caravan route, a route used by the caravans carrying treasures, coming from Mali or Mauritania for days and weeks, and through the river, the Kasbahs, the mountains, and, the gardens. These views and places will help you see the beauty of Morocco, as well as made a clear idea about the way of life in here we will passing  oases and Kasbahs, beside the river. The oldest kasbah, Kasbah Tamnougalte, in the Dra’a Valley is situated, . of  Agdz where you will spend a night in the traditional guest house

After bearkfast we will acrossing   the Tizi-n-Tinfifite pass to Ouarzazate.to see The Atlas film studio to take some photos after . Driving north, you leave the main road and take a side road to Ait ben Haddou,” and we drive by Onila valley, then to “Telouet” Kasbah, the ancient palace of the Glaoui Pasha of Marrakesh. Then continue to Marrakesh city, in order to spend the night in a hotel, passing by the 2 260m mountain pass “Tizi-N-Tichka”.

NOTE: If this tour we proposed to you does not match what you’re looking for, contact us and we will prepare a trip that fits your needs and requirements. 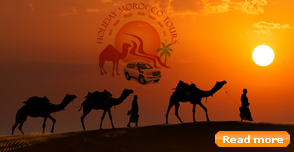